The Spirit Reveals Who We Are

Pius XII and John Paul II both lamented our Âloss of the sense of sin.Â ItÂs an intriguing concept in the abstract; at a personal level, itÂs haunting. But do we really understand the phenomenon? And are we free ourselves from the patterns that lead us to that loss? For my part, IÂve become increasingly aware of the continuing need for invoking the Holy Spirit, not only to provide guidance, but to reveal who we really are.

Prominent politicians and celebrities are often unashamed of their public views and private lives. So it only seems fair to point to their life patterns as a warning to others: the news stories of a wealthy and obscene pop star going through another bitter divorce and custody battle. And so forth.

For those of us in the business of conversion from sin, itÂs easy to identify the fork in the road where such people chose the path to immorality. In one such case, a celebrity admitted she left the Catholic Church as a teenager when she found herself mocking the notion that someone could be condemned to Hell for a single, willful impure fantasy. The refusal to repent this attitude started her on a life of sexual debauchery. It comes as no surprise to anyone with a true Catholic mind: we become what we freely choose. But are we truly aware of what we have become?

We all have Â to one extent or another Â demanding personal and work schedules. A schedule may enhance our lives by directing our work (and recreation). In executing our activities according to a schedule, we often experience a healthy sense of accomplishment. But when pressed for time because of distractions, we often cut a few corners and rush things, although we are usually not impatient over the Âbig thingsÂ such as getting a large task done on time.

We find ourselves far more impatient over the Âlittle thingsÂ Â those unexpected obstacles that interrupt an ÂimportantÂ daily routine or agenda. So when weÂre ÂambushedÂ by interlopers (salesmen, broken water pipes, electrical outages, and the like) we feel robbed of valuable time, and impatience wells up within us. 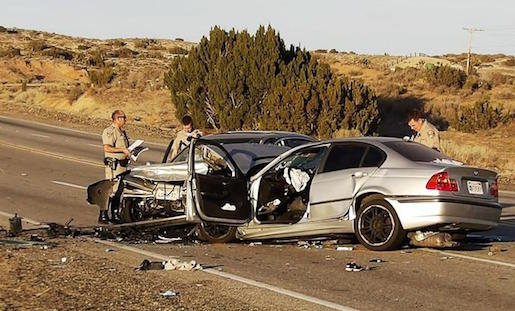 In particular, such impatience is easy to see on the road: bobbing and weaving through traffic at reckless high speeds. Under the spell of impatience, we see every car in front of us as an enemy, slowing progress. The car, of course, is a mere inanimate object, only a body without a soul. ItÂs a monster and has to be defeated by cuts and swerves. Some of the drivers are jerks, because they drive too slowly. Others are jerks because they take the parking spot that really belong to us.

In a more sober moment, we might admit that the other drivers werenÂt the real jerks. We were. ÂYou hypocrite, first take the plank out of your own eye, and then you will see clearly to remove the speck from your brotherÂs eyeÂ (Matthew 7:5). But this is just the beginning of the story, because patterns of impatience and resentments like these can have a truly monstrous ending.

In this light, the stories from our youth are no longer amusing and become warnings Â GodÂs way of speaking to us through the events of our lives. In the late 1970s, after graduation from college, a couple of friends drove to California in search of jobs. During one long stretch on a two-lane road, they found themselves behind an elderly couple in a slow-moving car.

At the appropriate time and according to the rules of the road, they passed the automobile and continued down the highway for several miles. Then in a horrible instant, they were hit head-on by a drunk driver. My friends were badly hurt. My college roommate had his legs crushed, but remained conscious through it all. The driver, his buddy, was unconscious, bleeding badly with the steering wheel crushing his chest, gasping for air, dying.

The wreckage must have been a terrible sight. But the car with the elderly couple soon came upon the scene. The woman emerged from her car, came to the window of the wreckage and peered in, preaching, ÂSee, that will teach you to drive so fast!Â She returned to the car and left the scene. The surviving friend told me the grim story after spending nearly a year in a hospital.

At the time it was the stuff of grim humor. But it is, to my mind, not grimly funny today. The incident has me wondering how it was possible for an elderly couple Â presumably all grown up Â to lack even the basic sense of decency and compassion in the face of horrible human suffering. ItÂs a worrisome thought: there is no age limit to our capacity for self-deception and the unexamined life.

But perhaps a useful reminder of our tendency to overlook the obvious in ourselves: longstanding patterns of ingratitude, haughtiness, selfishness, self-righteousness Â all the vices easily hidden from self-awareness. There are monsters in the world, and in ourselves. Sometimes we even are the monsters.
ItÂs worth pausing, often, to invoke the Holy Spirit and make an inventory of who we are and how we have become what we are. ÂWho can understand sins? From my secret ones cleanse me, O Lord.Â (Psalm 19:12)

This article has been reprinted here by permission of the author after original publication at The Catholic Thing-https://www.thecatholicthing.org/2016/05/22/the-spirit-reveals-who-we-are/